Half of the U.S. are now fully vaccinated and knowledge has increased not just around the virus, but the vaccine itself.

If you’ve never done your own research, I’m going to provide in this blog a deep dive of those ingredients backed by actual studies that were done on the ingredients found in these vaccines. There’s a ton of misinformation out there and a lot of it is to make you think these are safe and effective, but I think you’ll find the ingredients are not what you may have thought.

I’m only going to study just two of the most popular mRNA vaccines out there, but you should be able to see a common theme with the lipids being used to sneak the mRNA into your body and can probably assume those are in the others I haven’t mentioned as well.

All of the following FDA Fact Sheets on the vaccines tell you it’s not only experimental but they are NOT approved and are only approved for emergency use. I have a hard time understanding why it seems these are being pushed so hard on us if they are not even approved. And if the vaccines are so great, why do they have to convince the public they are safe and effective? There is so much propaganda out there to push these on people, even people that the FDA warns should not be taking these.

What I found of the utmost interest is that these ingredient lists aren’t telling you the adjuvants they include in the vaccines. Adjuvants are added to vaccines to temporarily weaken the immune system so that your body doesn’t automatically attack and kill the intruder virus or in the case of the mRNA vaccines, the genetic snippet of the SARS-COV.

I actually found on a MSM News site called, “COVID-19 vaccine ingredients and their purpose” that while they mention all of the other ingredients (as I did above), they did not go into detail on them, but instead elaborated on the adjuvants.

And if you really want to study up on the side effects of these vaccines such as blood clotting, risk of strokes, etc. there is another really good resource to look into called VAERS (Vaccine Adverse Events Reporting Site) > https://vaers.hhs.gov/data.html – Those with adverse reactions are reported here, although I’ve heard that they are two months behind on updating the site. I think you’ll find these adverse events surrounding the Covid-19 vaccines very troubling, if not disturbing.

Asking questions is prudent to critical thinking. It is extremely smart to be critical of everything you are being told and to question it. It is a sign of intelligence to be able to critically think.

Critical thinkers are now labeled as conspiracy theorists or anti-vaxxers because they simply question their world, question others, and seem to think for themselves. I’m not sure how you can be anti-vax against something that isn’t really a vaccine to begin with….

But ultimately, God warns against placing trusting in man.

Psalms 118:8
“It is better to trust in the LORD than to put confidence in man.“

Hosea 4:6, “My people are destroyed for lack of knowledge“

So why does it seem that man’s word is taken all the time as a golden stamp of truth? Especially when it comes down to the dangerous mRNA gene therapy drugs that are being experimentally and aggressively pushed. And these are being pushed hard. It is medical tyranny in my opinion to force experimental (or even approved) chemical and drug substances into anyone’s body without their consent. It’s horrific. That’s what the Nazis did to the Jews during WWII.

In fact, there’s more and more evidence coming out that these are dangerous..but it seems to be getting suppressed. Big Tech and others are silencing these doctors coming out and limiting the amount of information that can be found online about it. It’s not science if you can’t debate about it. That’s what scientists do, they debate.

There is more and more evidence coming out about the spike proteins these vaccines are creating within the human body and then how the vaccinated shed it for weeks, if not months, after. While studies are limited in this area, doctors are experiencing an unsettling amount of unvaccinated patients showing symptoms after being around vaccinated people as you’ll see in the video clips posted below. 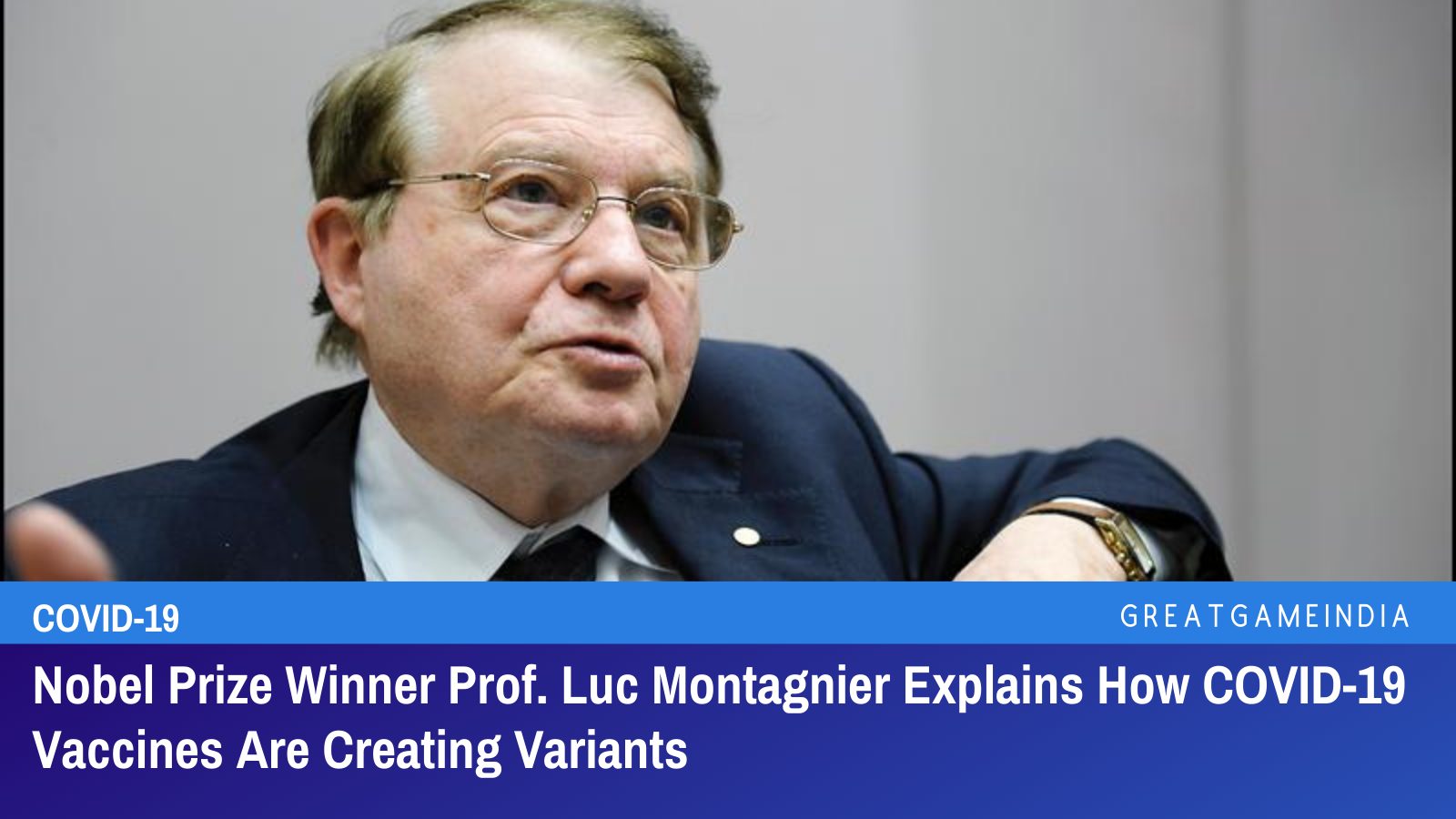 Nobel Prize winner French Virologist Prof. Luc Montagnier in an interview has claimed that the COVID-19 vaccines are creating variants. He said that epidemiologists know but are “silent” about the phenomenon, known as “Antibody-Dependent Enhancement” (ADE). He also explained those that have taken the ‘vaccine’ will die within 2 years.

I’d pay attention here. If the majority of the world wants you to NOT think a certain way and is preventing you from getting this type of information or hiding it, think about it. There’s something wrong here.

Here’s the clip of Luc Montagnier in his own words: https://youtu.be/bIdkWmISRMY

And to all my Christian brothers and sisters out there – Jesus would NEVER take a vaccine, EVER. Have you seen the ingredients I just listed out in those vaccines? This is nanotechnology. And maybe you don’t care, but when God tells you to treat your body as a temple of the Holy Spirit, what do you think you’re doing?

You research all you can when you buy a new car, but you won’t research ingredients, side effects, and dangers of vaccines before injecting yourself or your loved ones?

These are not even actual vaccines. The companies that make them even refer to them as gene therapy drugs. They are experimental. The FDA is telling you that. You are being experimented on.

Revelation 6:8 “And I looked, and behold a pale horse: and his name that sat on him was Death, and Hell followed with him. And power was given unto them over the fourth part of the earth, to kill with sword, and with hunger, and with death (famine and plagues), and with the beasts of the earth.”

Revelation 13:18, “…so that no one could buy or sell unless he had the mark—the name of the beast or the number of its name. 18Here is a call for wisdom: Let the one who has insight calculate the number of the beast, for it is the number of a man, and that number is 666.”

The gematria of 666 – 600 + 60 + 6 is curse, pharmacy, mark. The Word of God tells you the mark is going to come out of pharmakeia. The Greek word for pharmacy is pharmakeia. Pharmakeia is drugs, sorcery. People were NEVER meant to consume these poisons. This is why I’m an herbalist and created this website to help others heal with herbs. I woke up to this years ago.

Our medical system has been killing us and profiting off of us for years. I’m blown away that Christians can’t see this. One of the biggest deceptions of our time is our medical system. It’s satanic. May save your life for a bit, but what would’ve changing your diet to eliminate poisons and taking herbs have done for you?

God gave us everything we needed to stay healthy with and through plants and we reject it for what? Because we’re too lazy to learn and educate ourselves? Because we’re too lazy to eat right and learn good nutrition? We choose men to think for us instead of thinking for ourselves. It is a major concern and dangerous. We lack faith in God and that lack of faith will lead you to death.

Doctors and watchmen everywhere are screaming at the hilltops. Do you have an ear to hear? I’ve posted several interviews with very well respected doctors you should listen to. You will find these informative and eye opening.

If you reside in America today, you are residing in Mystery Babylon, the whore that rides the beast of the Book of Revelation and for those that have an ear to hear, Jesus is calling you out of Babylon.

Flee the cities if you can for God hates cities. Cain was the first in the Bible to create a city and he did it in defiance and rebellion against God. Cities will suffer God’s wrath.
We are to be a separate people – chosen by God to be a light in this dark world. We can be in Babylon, but not a part of her. Not a part of the world. Coming out of Babylon means not participating in her pleasures, her lies, her deceptions, her desires. Similar to pulling the plug on the matrix. Take the red pill folks. And may Jesus come quickly.

Jeremiah 51:45, “Come out of her, My people! Save your lives, each of you, from the fierce anger of the LORD.”

Revelation 18:4, “And I heard another voice from heaven, saying, Come out of her, my people, that ye be not partakers of her sins, and that ye receive not of her plagues.“

This site uses Akismet to reduce spam. Learn how your comment data is processed.

This site will educate you on many different types of herbs, herbal uses, organic living, and natural remedies. From the ground up, you’ll begin to see how you and this world are connected, and how plants work with the human body in providing you with what you need –  health and wellness.

Subscribe to my blogs! I hate spam as much as you do and I promise never to spam or share your email.

Detailed Information on Viruses and Vaccines